Skillful application of the evaluation and analytical options afforded by process simulation, including designing the best temperature-control system and making comparisons with alternative manufacturing processes, smoothes the way to efficient product development and manufacturing. Doing this from the very start of a project enables investments to be weighed and qualified, and technical, economic or environmental concerns to be taken into account, as exemplified here by a part with a high-gloss surface.

Whether it be in automotive engineering, the furniture industry or consumer electronics – high-gloss products are in demand, and are sure to grab attention, win customers over, and so secure market share. The commonplace perception of plastic as a cheap material has changed and it is now seen as a lifestyle material with maximum demands on its surface finish and under pressure to keep meeting new requirements. This process of change is also being influenced by other aspects that need to be addressed, such as economic factors and steps to reduce the carbon footprint.
The key to ensuring that a product will possess a given level of quality is to coordinate the various analytical and evaluation options afforded by process simulation, and then to heed and utilize the resulting insights with a view to enhancing the process engineering. Adopting such an approach from the outset makes it possible to evaluate manufacturing processes expediently and to define the most suitable range of applications.
There is no denying that the injection molding of high-gloss plastic parts is very challenging. All it takes for a sub- standard finish to result, for example, is a mold insert with a poor surface finish, an unsuitable material, or the wrong process parameters [1, 2]. In certain circum- stances, the desired level of high gloss may still be achieved by painting the surfaces in a downstream process [3]. The problem then is that the energy consumed in that painting process contributes from 5 to 15 % of the overall cost of parts manufacture [4]. Against a backdrop of growing demand for greater production efficiency and a need to combine the lowest-possible manufacturing costs with high product quality, alternative processes must be found [3].

Weighing the Costs and Benefits of Variothermal Temperature Control
The three major factors governing the quality of high-gloss surfaces made by injection molding are injection speed, holding pressure, and mold temperature, with the last of these having the greatest impact [5]. Although high mold temperatures can yield nearly ideal high-gloss surfaces, the long cooling times necessarily give rise to long cycles. These can be avoided by employing variothermal temperature control, which represents a practicable alternative for the production of high-gloss parts [5]. In this connection, the use of simulation to predict part quality at an early stage, ideally during product design, is recommended with a view to forestalling unforeseen costs and part defects [6].
In the course of close collaboration on the design of a manufacturing process for a high-gloss part, Contura MTC GmbH and SimpaTec GmbH compared the use of both conventional thermal and variothermal control. They used the same injection mold with conformal cooling for both processes (Title figure). Premec S.p.A., Toolax and Contura MTC played a substantial role in the development and manufacture of this mold. The customized temperature-control system exerts a strong influence over the mold-wall temperature (Fig. 1).

Figure 1:The view of the mold interior in the simulation model shows the temperature difference at the end of the filling stage: variothermal control on the top side leads to higher mold temperatures than on the conventional temperature-controlled side (below).

The comparison consisted in evaluating the surface finish of the respective parts and estimating the cost and energy requirements of both processes, while making allowance for any necessary additional painting. Process simulation was used to assess whether the molded part’s surface finish could be predicted early in the design stage, thus making it possible to consider the costs that might arise from a painting process. The use of different materials was also analyzed; e.g. the reference part was made from a PC+ABS in one case and from a polyamide 6 with 30 % glass fiber content (PA6-GF30) in another.
The PC+ABS reference part yielded a high-gloss surface in both process variants. Dynamic alternating temperature control produced an ideal piano-black finish (Fig. 2, right), free of streaks, weld lines and similar defects, and with no need for downstream painting. The conventional temperature-control process also yielded a streak-free finish at first glance. However, weld lines are clearly visible on closer inspection (Fig. 2, left), with the result that a downstream coating process is necessary for achieving the desired piano-black surface finish. 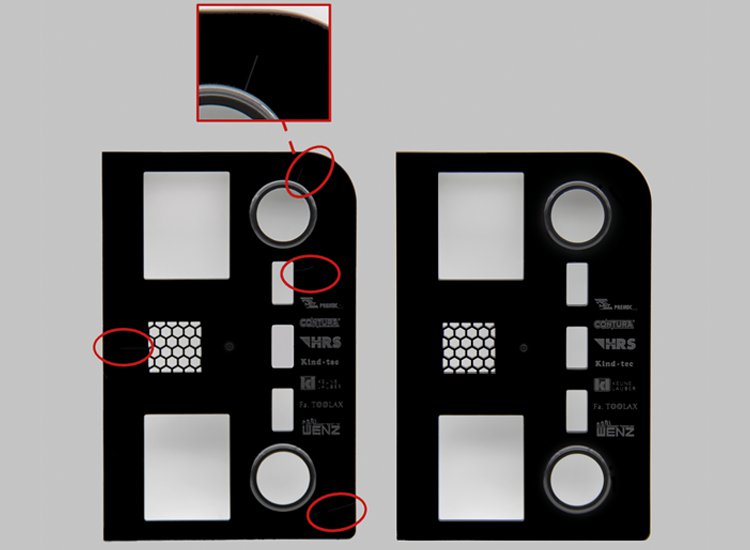 Figure 2: The PC+ABS reference part had a high-gloss surface in both process variants, but weld lines were absent only in the variothermal variant (right).

The integration of a downstream process step, such as painting, not only necessitates more outlay on resources in terms of organization, transport, packaging and handling of the part during post-treatment. It also leads to greater energy consumption and thus incurs higher costs that must also be taken into ac-count. That being said, injection molding with variothermal control also consumes more energy. So, how great is the additional outlay in reality? This is what has to be compared.
To this end, measurements were made of the energy consumption of an injection molding machine (type:
Si-180-6s; manufacturer: Toyo Machinery & Metal Co.), including all additional temperature control units, in the production of 40 reference parts by both methods. The conventional method consumed 2.882 kWh over the course of the 40 cycles, rising to 7.868 kWh when the dynamic temperature control was added. This represents a 2.7-fold increase in energy consumption. Given an electricity price of 20 cents per kWh (as of 2020), the extra cost per part is thus just under 2.5 cents [7].
This is a small increase compared with the cost of the downstream painting process needed for conventional mold-temperature control, where the extra cost per part for a batch of 25,000 units and a single coat of paint works out at more than 45 cents. And that figure excludes handling, possible one-time costs and coating waste of approx.
2 %.
The outcome is that the variothermal variant is more cost-effective than the conventional variant (including the outlay needed for the painting process) by a factor of at least 18.

Simulation for the Purpose of Cost Estimation

The temperature of the weld lines at the time of their formation can be used to infer how pronounced they are. When melt fronts converge at elevated temperatures, the mixing is more extensive because the melt viscosity is lower, and so the weld lines are less pronounced. In the variothermal variant, this manifests itself on the variothermally controlled side of the part, i.e. the visible surface of the top side. There, the temperature is still so high that the real part shows no signs of weld lines at this point (Fig. 2, right).
The simulation reveals the different temperatures of the weld lines. In the variothermally controlled visible surface (top side) of the part, the temperature of the potential weld line is so high that the data points indicating even higher temperatures can be ignored as far as weld lines are concerned (Fig. 3, right). In the absence of variothermal control, weld lines of lower temperatures are formed which can be detected with the help of the data points (Fig. 3, left). Aside from the weld lines, it is also important to com-pare the shear stresses induced on the part’s surface by the two temperature-control variants. For the rest of this article, the focus here will be on the glass fiber-reinforced material.
Comparison of the simulation results produced by both variants reveals clear differences in the parts’ surface quality. However, in the case of the variothermal variant, this must not be construed as a definitive guarantee of a perfect finish or of the elimination of an entire painting step. That would require further tests that provide insights into additional influencing variables, such as the surface finish of the mold. Nevertheless, the results do reveal a visible improvement in surface finish of the variothermal part, a fact which should be highly influential in the decision as to which manufacturing process is suitable. 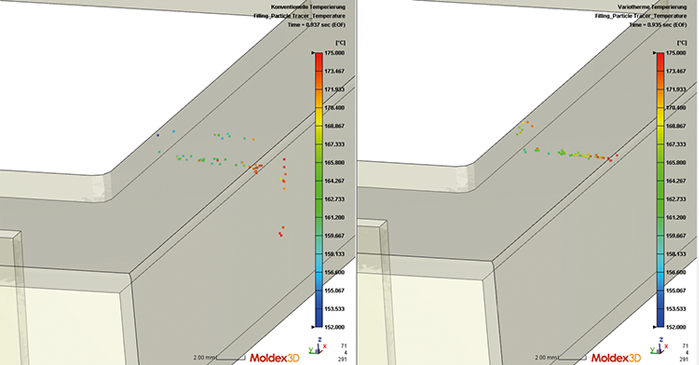 All or Nothing: High Gloss on Glass Fiber

Parts made from polyamide 6 with 30 % glass fiber content illustrate the difficulty of achieving a glossy finish without recourse to any coating at all. The finishes resulting from conventional temperature control were so critical that in some cases there was no point in considering painting to a high gloss finish due to a lack of feasibility (Fig. 4, top left). Such a situation would not be accept-able in in a real-life product-development process. The choice of dynamic alternating temperature control man-aged to salvage what was still salvageable: an acceptable surface finish (Fig. 4, top right) that would lend itself to down-stream painting and still be capable of producing the desired high-gloss sur-faces. Notwithstanding the need for downstream painting, in this case, it was the use of variothermal control that made it possible to produce a high-gloss surface in the first place.
Comparison of these Moldex3D simulation results with the real part surfaces reveals parallels which allow of the possibility that the debacle described above may be predictable (Fig. 4). The simulation shows the maximum shear stresses at the end of the filling phase in both variants (Fig, 4, bottom). The gradients of the shear stresses suggest a non-uniform part surface, a fact which is emphatically confirmed in the case of conventional temperature control (Fig. 4, left).
The less-pronounced shear stress gradients in the variothermal simulation coincide with a higher-quality surface on the real part (Fig. 4, right). As was the case earlier for the weld lines, the shear stress simulation can also indicate the direction in which the downstream surface quality of the real part is trending. This test on PA6-GF30 also underscores the import-ant contribution that injection molding simulation can make to predictions as to the feasibility of part production. 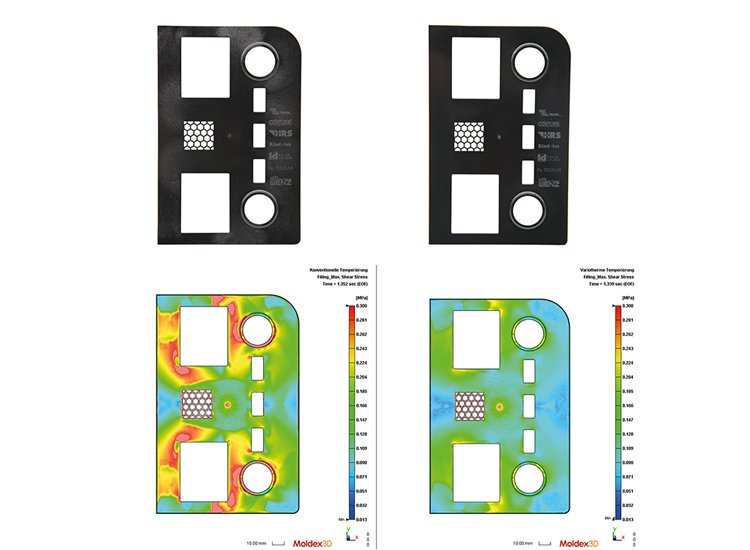 Figure 4: The simulation of the shear stresses (bottom) indicates the direction in which the down-stream surface quality of the PA6-GF30 real part is likely to trend – shown here is the higher-quality surface produced by variothermal temperature control (right).

Painting Needed or Even Possible? Use Empirical Values

A better interpretation of the absolute values of the shear stresses and the temperatures of the weld lines can be obtained with the aid of the Moldex3D iSLM platform. Among other things, this interactive platform for data management for companies in the plastics industry can store knowledge that has already been gained – such as the size of model features, gate sizes, gate types, cooling systems, sampling parameters and CAE simulation results – so that it can be used for comparisons in subsequent projects.
The approach described here is transferable to other product-development processes, such as the manufacture of foamed parts. Although achieving the optimum temperature control needed for a high-quality part surface poses a particular challenge in this case, it also offers huge potential for process optimization.

Acknowledgement
The authors would like to thank Contura MTC for the excellent collaboration.